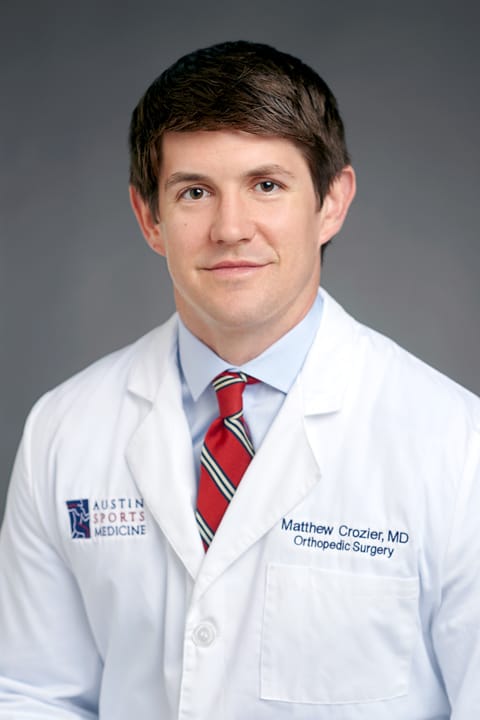 Dr. Crozier completed his Orthopaedic Surgery residency at the University of Florida where he served as chief resident in a level 1 trauma center and physician for local high schools as well as being involved in the care of college athletes.

He then completed fellowship training in Sports Medicine in Birmingham, Alabama at the prestigious American Sports Medicine Institute. Working under world-renowned physician Dr James Andrews, he served as an assistant team physician of Auburn University and treated a diverse range of recreational and professional athletes, providing care to the Alabama Ballet, the local affiliate of the Chicago White Sox, and the WWE.

Throughout his training Dr Crozier stayed very engaged in the Orthopaedic community, participating in research, authoring a book chapter and both presenting and serving as faculty at national meetings. Since returning to Austin, Dr Crozier has continued to care for recreational, college and professional athletes. In addition to extensive experience in fracture and minimally-invasive arthroscopic treatments, he has received advanced training in novel non-surgical and surgical treatments of sports hernias. Dr Crozier also has a keen interest in robotics, having received advanced training and now performs outpatient robotic partial and total knee replacements.

In his spare time, Dr Crozier enjoys the outdoors, staying active and spending time with his wife Fiona and their children Walker, Scarlett and Pierce.