Read More About the Author at the Bottom of the Page: Tyler Sauder, student DPT

It feels like every fall, as the weather begins to change and the sun disappears earlier and earlier, everyone starts counting down the days to that big west coast ski trip they’ve planned with their family and friends.  And then, all of the sudden, its Valentine’s day and I find myself far from lonely, as I am surrounded by an abundance of patients accompanied by their most loving and trusted companions: their crutches, slings and knee braces. 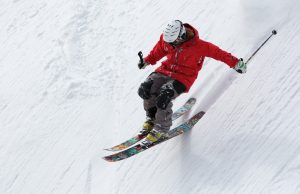 Skiing is one of the most popular winter sports worldwide. Today, it is estimated that there are approximately 14.5 to 15 million skiers in the U.S. and 200 million skiers worldwide. Of all those who ski, there is an overall injury rate of approximately 3 per 1000 skiers, meaning that skiing is the riskiest sport undertaken on a routine basis by adults.1

Skiing is often considered a fantastic vacation idea, a wonderful hobby, and a great source of exercise. However, as with most types of physical activity, there are many elements of risk. The degree of this risk is affected by multiple factors, including: age, skill level, snow conditions, improper equipment, and most importantly, physical conditioning.  However, this risk can be minimized through learning about the most common ski injuries, proper equipment, and appropriate exercise and training. This will help you spend less time in an Orthopedics office and in Physical Therapy, and more time shredding the slopes.

How Do Skiers Get Hurt?

Shoulder: Trauma to the shoulder accounts for 4% to 11% of all skiing injuries. The most common injuries are rotator cuff strains or tears, anterior shoulder dislocations, acromioclavicular separations, and clavicle fractures.3 Injury usually occurs either from a fall on an outstretched arm or an abduction-external rotation torque applied to the shoulder by the ski pole pulling the arm back as the skier moves past the arm on the hill.

Wrist & Hand: Ski falls are the most common cause of acute ulnar collateral ligament (UCL) injury to the thumb. Injuries to the UCL are responsible for 8% to 10% of all ski accidents1 and they occur because of a fall with the ski pole maintained in the hand, resulting in a forced adduction and extension of the thumb. It is believed that a significant component of the injury results from the fact that the skier falls past the thumb as momentum carries him or her down the hill, resulting in a severe valgus load to the metacarpophalangeal joint. Along with UCL injuries, the same mechanism of injury can result in distal radius fractures; commonly known as FOOSH (fall on out stretched hand) injuries. Bracing a fall with an outstretched hand under high force can lead to a FOOSH injury. The main difference between a distal radius fracture and damage of the UCL is the presence of the ski pole in hand or not. When holding on to the pole the thumb bears the initial impact causing damage of the UCL. When the ski pole is released the wrist accepts the initial impact and the radius takes in about 75% of the force,4 often leading to fractures of the wrist. 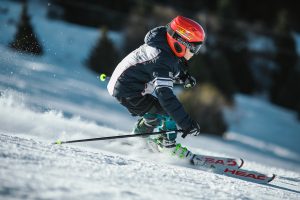 Knee: The knee continues to be the most frequently injured area of the body in alpine skiing. Rates of knee injury have been reported to be between 20% and 36% of all injuries, with most knee trauma being that of injury to soft tissue.1 While the relative rate of knee injuries has remained constant, there has been a very disturbing statistical trend toward increasing ruptures to the ligamentous structures in the knee, particularly to the ACL.

There are three common mechanisms of injury that result in ACL rupture:

Age and skill level have remained one of the largest contributing factors that have led to injury while skiing. Many young people enjoy skiing at the edge of their ability to maintain control. However, children (aged 12-16) are usually of ability to ski efficiently, yet all too often show recklessness which frequently results in injury. It’s the beginners who have the higher rate of injury, only their injuries tend to be less severe. “Experts,” or those who are highly experienced, have less frequent, but more severe injuries, like ligament tears, and fractures that require surgical repair. The difference between the two types of skill levels and their types of injuries boils down to their speed, age, and judgement. Children under the age of 12 tend to be less reckless and get injured less than teenagers, but hurt themselves twice as much as adults.2 This can be attributed to the body’s natural development pattern. Before puberty, bones are still growing, bone end plates have still not completely closed, and muscles are not fully developed. It is the lack of muscle mass and fragile bones that leads to a higher rate of injury even though they are not putting their bodies through as much shear and compact force as the experienced, mature skiers. On the contrary, as people age into their later years, they slowly lose muscle and bone mass, which leads to a decrease in coordination, flexibility, and overall physical capability.6 Although we cannot train or change our age, we can be aware of our bodies general make up and how genetics can play a role in our overall abilities.

Tip: Understanding your personal skill level and boundaries, is an important factor in injury prevention. i.e. If you have never skied a black diamond, the end of the day during one of last runs is not the time to try it!

Can Weather Influence my Risk?

Snow conditions affect injury patterns, as well. Hard pack, or icy snow generally yields high-speed and impact injuries. When on the other hand, fresh powder and heavy snow is associated with more torsional or twisting injuries. Quick changes in snow conditions, such as hitting the hill between fresh fallen snow and snow that has already been tracked over can cause a fall that leads to different types of injury.

Tip: Understanding how different snow can lead to different types of injury can be beneficial in the long run. i.e; In deep, soft, freshly laid snow, there will be a lot of turning and cutting, so prepare knees for high load of force and make sure you stretch and warm up before getting on the lift. In icy and compact snow, be prepared to brace your fall on the slippery slopes and remember to ditch the poles and try and tuck and roll.

Will My Body Tell Me When to Stop?

Physical conditioning will always be the most important factor in injury prevention when skiing. The better shape and stronger a skier is, the less likely they are to injure themselves. Per expert stakeholders in the World Cup ski racing community, a superior fitness level is one of the most important perceived factors for injury prevention.5 Along with strength, muscular endurance plays a significant role in protecting ourselves from injury, especially in the knee. Muscle fatigue is known to have a negative impact on balance control and reaction time.  After a long day spent skiing, naturally, the muscles of the legs that support the knee are fatigued. The hamstring muscles act as an agonist to the ACL resisting anterior translation of the tibia relative to the femur.7 It is the eccentric hamstring strength that acts as the catalyst to turning and cutting through the snow. The eccentric, or lengthening component is twice as high in magnitude and duration as the concentric, or shortening component.7 Therefore, it seems plausible that the decline in hamstring strength, endurance and physical fitness level contributes as large risk factors for injury.

Tip: Prepare for your ski season by getting in shape, by following a conditioning program focusing on strength and endurance components specifically for the legs and core I.e. Try some exercises like single leg bridges and eccentric heel slides that are listed below in the section on knee exercises.

Are My Skis Safe? 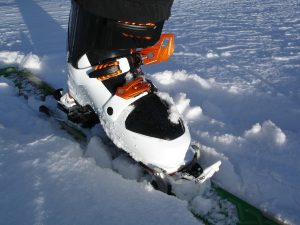 Changes in modern ski equipment and improvements in slope design and maintenance have contributed to a decline in injuries over the past several years, yet there is still a significant number of skiing injuries. Previously, fractures were more common, but since these technical changes, injuries of the ligaments of the knee have increased. The bindings protect the foot, ankle and tibia from fractures, but the forces must be dissipated somewhere else, right?   Skis have a rigid coupling with the foot that increases the forces to the leg and knee. These forces are often greater than our bodies can absorb. This boot- binding interface is the most common cause of equipment-related injury.2 The modern bindings, which release in a multidirectional pattern, have decreased the incidence of fractures by more than 80 percent. Unfortunately, knee ligament sprains have not decreased and have increased over the last 20 to 30 years.2 It is the bindings that are the main culprit, even with their improvements year after year. If there is only one piece of ski equipment to spend your money on, it should be good ski bindings.

Tip: Get your ski equipment checked by a professional before the start of the ski season. Bindings should be tested each year and should be replaced every 3-4 years due to the wear and tear. i.e. A self-release test of the bindings should be performed each day of skiing by kicking out your bindings to make sure no debris is inside the bindings.

Skiing is a very popular, seasonal sport that unfortunately, often results is injury. These injures can often be avoided if you make sure you are physically prepared, you have sound equipment, and you stay aware of ski conditions and your own capabilities. The following are exercises recommended by the ASM Physical Therapy department in order to improve strength specifically required during skiing: 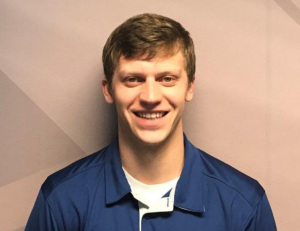 Tyler is a 3rd year Physical Therapy student originally from Philadelphia, PA who received his B.S. in biological sciences from the University of South Carolina in 2016. He has spent the past two and a half years in Physical therapy school at Methodist University in North Carolina before coming to spend his last clinical affiliation with our team here at ASM. Tyler will graduate this May and plans to specialize and work in the outpatient sports and orthopedic setting. When not in the clinic, you can often find Tyler trying to better his golf game, and cheering on his Sixers and Eagles.

What do you know about PRP (Patelet-Rich Plasma) and Stem Cell Therapy? Aug 18, 2016